The aim of stichting ALA is to give our audience a view into the cavalry of the Roman army. To that extend we can join your event with a series of displays. Several options are listed below, but feel free to contact us to discuss further possibilities.

Our main focus is at the first century ala I batavorum, the first wing of Batavian cavalry. This unit possible had one of their recruitment stations at the Kops plateau in Nijmegen, the site where a couple of unique cavalry helmets were found. The equipment of our cavalrymen is therefore mostly based on local finds from Nijmegen and surrounding area, including the Kops plateau silver plated facemask helmets with real horse hair embroidery over the bowl. In a 20-25 minutes show we will introduce Roman cavalry, their equipment and tactics and of course, their skills at arms. A spectacular, yet education addition to any Roman living history festival.

Roman cavalry from Julius Caesar till Constantine the Great (time-line) 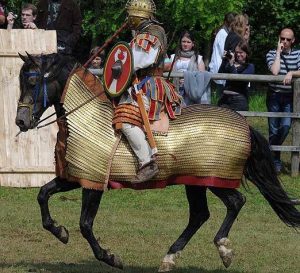 Fashion changed. So did it in Roman times. In a show with 4 to 6 cavalryman we can explain exactly that. How did the Roman cavalry change over time. Change in tactics (both of their allies and enemies) means the Roman army did change. Not only got equipment more elaborate, even more was heavy cavalry introduced into the army. One of the highlights of this display is our Clibinarius (full armoured heavy cavalryman) with his horse fully protected in scale armour. Of course the focus on any period of the Roman empire is possible.

Xenophon and horsemanship (training the horses)

Horses add something spectacular. They are powerful creatures, but… bringing a horse into battle (or into a show arena) isn’t that simple. Horses are flight animals, approaching the enemy is not something they would normally do. The ancient Greek commander Xenophon (430 – 354 BC) did wrote about good horsemanship. His basic training techniques are still used today and start with the bond between the rider and his mount. This display, which is particularly suited for smaller events, shows some of the training of the horses and explaining the art of horsemanship according to Xenophon.

As our team is formed by seasoned re-enactors and education professionals we can offer a wide range of smaller and bigger options to add the cavalry experience to your festival. One can think about a small static display on cavalry equipment, where one of our equites will gladly show the public all the items on display, ranging from the typical horned Roman saddle, the horses tack and the cavalryman’s own arms and armour. Further options can range from a mounted bellmann to a show with eques gladiators, just contact us and see what we can offer.  Interesting to know is that we can also do a Roman sutor (leather-worker) display, where we possibly can have a focus on the Roman saddle and tack. 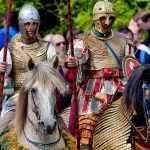 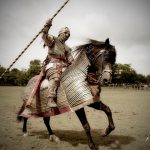 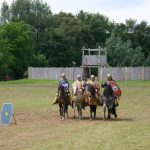 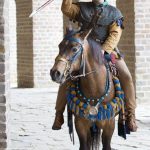 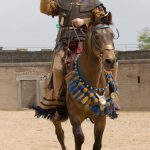 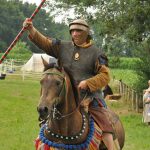 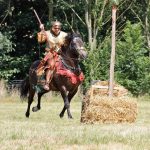 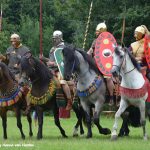 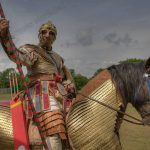 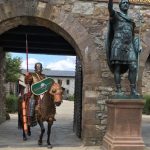 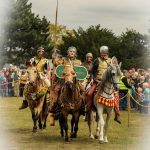